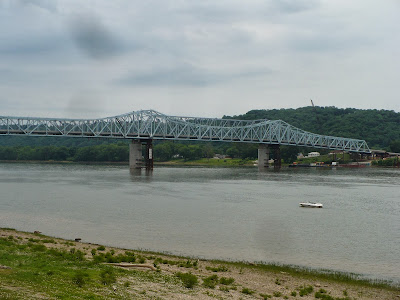 We took a trip over the summer up to Madison, Indiana and Milton, Kentucky to check out the bridge work they were doing.  Its a rather strange project, one that we decided to document with this post, as we knew it wouldn't last long.  Check out the photo-set inside. 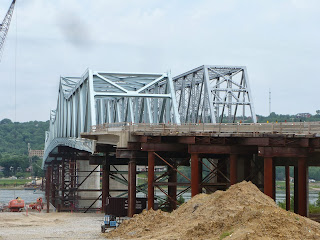 Yea, you're seeing that right.  There are two bridges across the Ohio river.  The older two lane bridge is on the right, and the newer four lane one is on the left.  So...whats the drill? 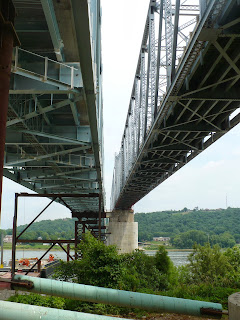 This photo should clear it up.  The old bridge is resting on the original concrete piers, while the new one is sitting on a temporary metal sled system.  Once the new bridge is complete, the old one will be demolished, and the new one simply slid into place.  This sounds amazingly complicated and dangerous, buts the plan.  These people are engineers, so I'm gonna go with their judgment. 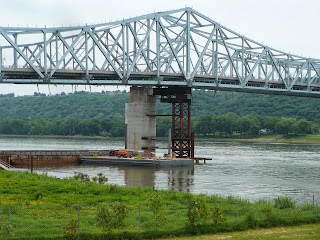 A side shot, showing the temporary piers.  Driving pilings into the middle of a river is rather expensive, so I suspect that is part of why this method was chosen.  Since they were able to keep the old bridge open, the total planned closure is something like seven days.  Were this bridge to be gone, it would be a great loss to the communities on both sides of it. 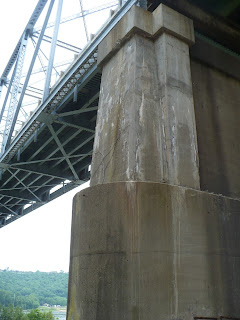 The old piers have been renovated somewhat, and it shows. The new concrete is a different color. 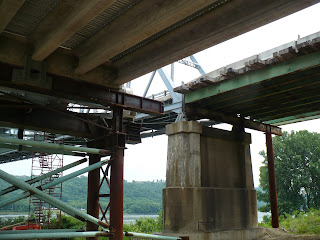 Another shot from underneath, showing the system of scaffolding and sleds. 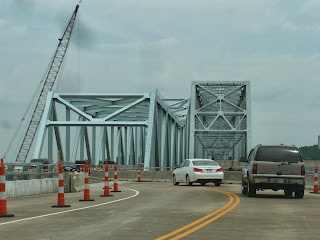 While we were up there, the new bridge had actually been opened, and the old one was being demolished.  The concrete roadbed was being stripped, and then the decking was removed.  A few weeks after this series of photos, demolition of the old span began.  There are some video links below... 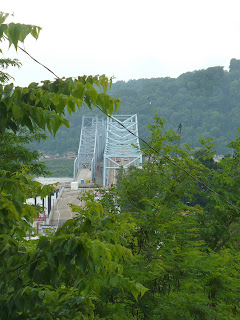 A final view from the hills above.  The scale of this project is truly massive and unique.

Posted by Daedelus Houndstooth at 9:44 PM