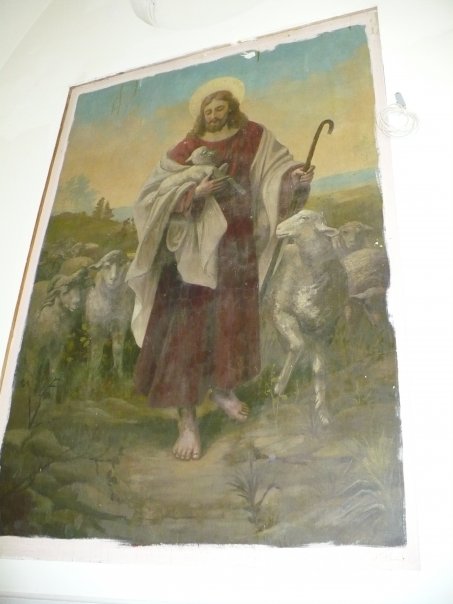 Located in what used to be the sanctuary of a beautiful historic church, this giant mural of Jesus the shepherd is now hidden from view, the whole building having been remodeled into office space.  Join us as we explore this church and the and the fascinating way that it has been saved through re-purposing.


Construction began on this church in 1888, and it was completed in 1889 at a total cost of $3,450.00.  Originally built for the Methodist Episcopal South, the structure continued to house the various incarnations and mergers of the organization until it was replaced by a more modern structure in 1993.

Great care was taken to keep this historic building largely in it's original condition, while at the same time making it usable into its third century of existence.  All of the modifications can be easily undone, and new pews placed back into the building.  The whole structure could simply have been razed and replaced with a cinder block cube, devoid of any history or local context.  Instead, a brave decision was made to save this interesting building, and we here at Eerie Indiana commend those craftsmen, designers and decision makers who made it possible.

For more posts similar to this one, click here.

Posted by Daedelus Houndstooth at 12:59 AM