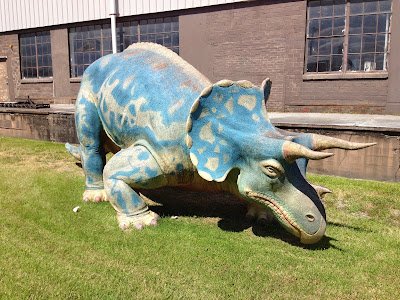 Something of a local icon, this fiberglass triceratops has been in Louisville, Kentucky, for decades.  Property of the science center, it is currently in the parking lot of a factory in the downtown area.  It is still owned by the Louisville Science Center, but its future and conservation is unclear.  Join us as we explore some of its history. 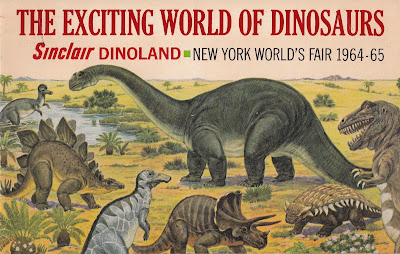 Originally built for the 1964 World's Fair in New York, the Louisville Triceratops was one of a set of eight large scale fiberglass dinosaurs built for the Sinclair Gas Station display.  While they are now scattered throughout the US, at one time they were on tour together, making stops in major cities across the country.  They were then disbursed, and the triceratops ended up as property of the Louisville Science Center.
As time wore on, the dino began to show a great deal of wear.  Its original finish was covered in a new coat of paint, but it was still left outdoors.  Eventually, the science center apparently tired of having the dino out back, so they sent it to storage.

"Storage" apparently means a parking lot around a mile from the science center.  Left to the elements, it has begun to show a great deal of wear.  Its paint is again fading, and the fiberglass that it is made of is beginning to crack and break.

A number of local groups have sprung up to support the dino and its restoration, but to date, nothing has been done.  A phone call to the business where it is located confirmed that it is indeed still owned by the science center, but nothing else is clear.  Hopefully some donor will step up to the plate to save this interesting relic.  Until then, you can actually buy your own small version of the dino....

The locations of eight of the nine original dinos are known today, including the Triceratops.  They would have stayed together, but the Smithsonian Museum in Washington, D.C. declined to accept them as a donation.  Here are links to the others that are known:

The Ornitholestes, at just six feet in length, has just disappeared.  Hopefully its in a private collection somewhere.

At the World's Fair, and while on tour, children both young and old could get copies of an interesting little booklet about the dinos on display.  While full of factually questionable stuff, its still a pretty neat piece of marketing history.  Here is the book, in its entirety. 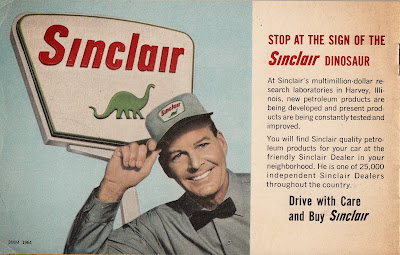 Some more links of interest:

Creepy Classics article on the dinos.