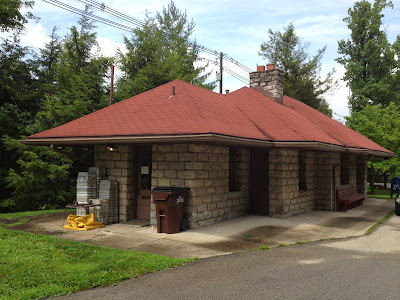 Glenview, Kentucky, is located just east of downtown Louisville.  What serves today as a post office was actually once the town's interurban trainstation.  It has been carefully preserved, keeping its unique character and old-style charm

Abandoned in the 1930's, the Louisville metro area was once connected by a series streetcar routes.  These lines, stretching from downtown Louisville to the surrounding suburbs, allowed wealthier workers to ability to move outside the urban core.  Even today, there is a correlation between these trainstations and wealth, with prosperous communities still being nearby.

Rather than tear down this old station after its abandonment, the City of Glenview decided to restore it, and today it houses the local postoffice.  While it has been somewhat modified, it retains most of its historic details, including ticket windows and fireplace.

The Glenview postoffice is a wonderful example of what can be done when preservation is the goal.  As always, we here at Eerie Indiana commend such efforts.