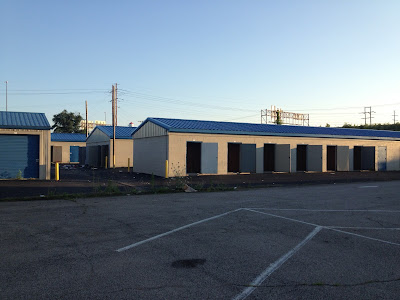 We've been to a lot of interesting and strange places while working on this site, most of which were notable only for what we saw.  These abandoned storage units, on the other hand, were truly scary to wander through.  It felt like a creepy movie; every door, every aisleway.  This is what we saw that day.

There is a great deal of construction going on right now in the Louisville area, most of which relates to a pair of bridges that are being built across the Ohio River in the coming years.  With this construction comes abandonment and demolition, as is the case with this storage unit facility here.


Its hard to know exactly what happened here, but we came up with a pretty good theory.  It seems as though tenants of the units were given notice to move their stuff out.  Nearly everyone complied, of course.  Those that did not had their stuff ransacked.

One locker in particular had a large amount of stuff, most of which was drug out and pilfered.

After rounding this corner, we suddenly got a weird feeling, that animal part of our brains kicking in at last.  I could feel eyes on me, even though I couldn't see anyone.  I began to backtrack towards the car.


At this point in time, we began to realize that had thrown up flags for us.  Homeless people were living here, setting up small bedrooms in the various empty lockers.  We saw a few individuals as we drove away that afternoon, coming out of the various units we had walked past, perhaps 6 or so total.


Another visit a week later confirmed that local authorities had locked down the complex.  Most of doors were now zip-tied shut, a modest effort to keep people out.  Regardless, we decided not to linger.  This place is still too unsettling.  It gives the impression of walking down a long hallway in the dark.