The Great Pyramid of Bedford-Needmore, Indiana 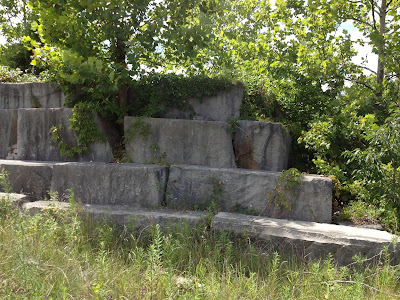 Largely forgotten in the woods of rural Indiana, the Great Pyramid of Bedford-Needmore is a monument to poor planning coupled with government spending.  Little more than a disorganized pile of stones, this is all that remains of $700,000.00 effort to build a limestone "amusement park" near the so-called Limestone Capital of America, Bedford Indiana.


This strange story begins in 1979, when someone in the town of Bedford, Indiana began a desperate search for some sort of new revenue, ultimately settling on the idea of separating tourists from their hard earned money.  This idea had worked for many towns and cities across the United States.  Las Vegas, Panama City, Niagra and so on; these cities each and all draw much of their revenue from outsiders.  However, and this is a big however, they all have some sort of attraction, be it gambling, prostitution, or even something as simple as the beach.


How was little Bedford to compete with these heavyweights?  Lacking a beach, the project seemed to die before it even had a chance to be born...But, what if there was a solution laying just below the surface of the verdant fields surrounding the city?  A limestone theme park was the obvious answer.

While crazy, this idea isn't totally without thought.  Bedford, it seems, its built on top of what is perhaps one of the best limestone deposits in North America.  From the Pentagon to the Empire State Building, to a house in your neighborhood, Bedford's tight grained and pale colored limestone is a very desirable good.  For decades now, this town has been shipping blocks of itself, both large and small, all over the US to be used in construction projects.  But a pyramid?


After much thought, the city decided to focus on this construction history, and build a tourist attraction that would both feature and show off the stone that made the city so notable.  The hope being, of course, that people from near and far would drive to Bedford to take in the limestone scenery.  To this end, they decided to build both a 1/5 scale copy of the Great Pyramid of Egypt, as well as a large section of the Great Wall of China.  Funding was secured from the U.S. government, to the tune of nearly three-quarters of a million dollars, and construction soon began.  While advertised as being in Bedford, the actual site is located in the small neighboring town of Needmore, situated in the middle of an open pit mine.
All was not well though.  As soon as the project made the news, Democratic Senator William Proxmire gave the project a "Golden Fleece" award for its perceived waste.  This ignoble honor, coupled with a depletion of the funds caused the project to be abandoned, and nothing has been done on the site for almost thirty years.


To be honest, the most impressive bit of this site is the aerial photography of it.  Most of what remains is jumbled stones, roughly thrown into stacks, covered with trees and other foliage.

While the small pyramid actually has a few steps that form a basic shape, the large pyramid is just a giant stone square.  They dug down 17 feet to reach bedrock, but built very little above ground.  Nothing of the Great Wall could be found, and the general disarray of the site makes exploring it rather difficult.

The site is also covered with the obvious remains of its days as an active mine.  A small section of rail remains, along with some truck tires and piles of cut but unused stone.  If they truly spent $700,000.00 on the project, I have no idea where it went.  One thing is for sure though, these ruins will be on site for decades to come, provided that they are hauled away to be used in a building near you.