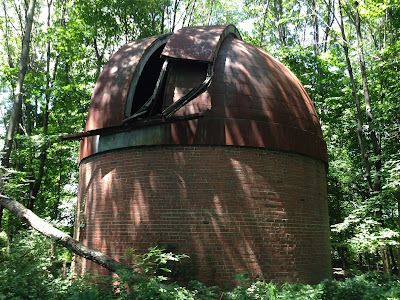 Abandoned in the woods near Bloomington Indiana, this old space observatory is slowly fading into ruin.  Long since abandoned because of its location, this strange relic stands guard in an empty lot outside town.


Located outside of Bloomington Indiana, this building once housed a fairly large telescope.  While this structure is now in a fairly built up area, when it was built in 1936-1937, it was in a very remote place.


The building is a cylindrical in shape, made of brick, with a wooden dome roof.  The walls are quite thick, and second floor is constructed of wood.

Sometime in the 1960s, the building was stripped of its telescopes and mounts.  They were shipped to New Jersey for installation in the Paul Robinson Observatory.  Based on published statistics, this must have been quite a task, as the hardware was seven foot in diameter and weighed over 8,000 pounds.  I believe this was due to "light pollution" from the neighboring developments, something which would have rendered the telescope useless.


Photos of the telescope being moved and restored.

The whole roof of the building was designed to rotate, so that the opening could be aimed it its target.  To accomplish this, the dome is actually sitting on rollers.  They are long rusted in place.