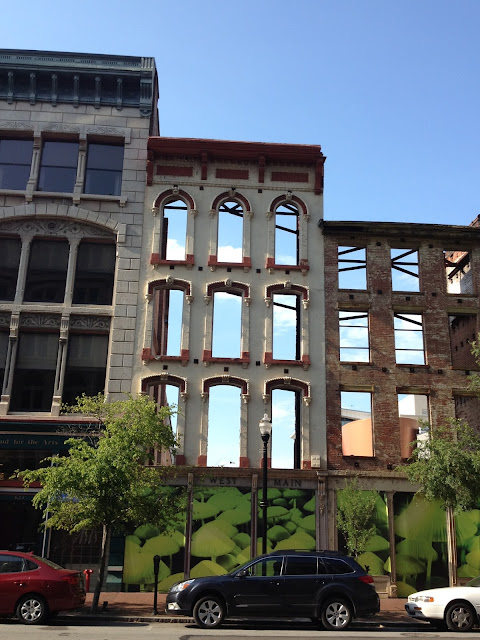 Louisville has several claims to fame, most involving athletics.  An outlier, perhaps, is Louisville's pride in its iron front buildings along main street.  Much effort is put into preserving them, even if that means that only their facades survive, as is the case along part of West Main Street.  Join us today as we look at these strange structures.


Louisville has perhaps three major points of architectural distinction:  Its massive collection of Victorian Era houses in Old Louisville, the shotgun houses that dot the city, and its iron facades along Main Street.  Efforts are frequently made by local preservation groups to protect these buildings, and what we see here is the results of one such effort.

Yea, they torn down four historic buildings, and used the resulting space for a parking lot. -facepalm-

A fence was put up to protect the parking lot from criminal parkers.  If one approaches the fence, the bizarre becomes even more apparent.  The remains of now-gone doorways and staircases are visible along the brick walls, along with the outlines of floors and the sloped roof. 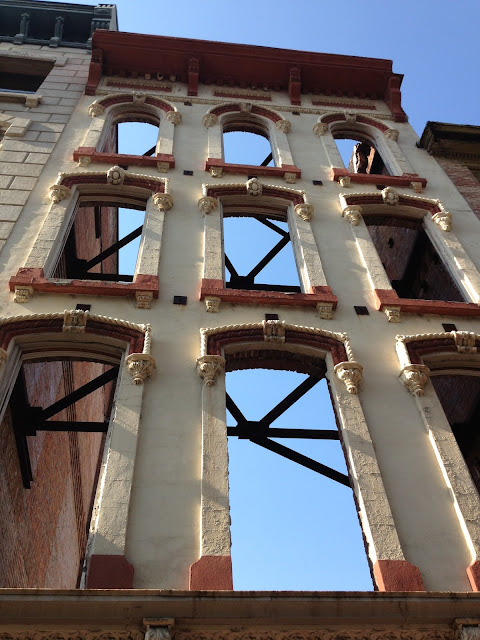 Another shot of the front shows the steel skeletons that now support the facade, given the absence of floors.  The blue sky makes for interesting photo effects.

Further west on Main, another building is trying to become a parking lot.  A stairwell collapsed in this building a few years ago (if my memory serves me right), injuring a few people.  The building is in structural distress, and a steel lean-to is apparently holding it up. 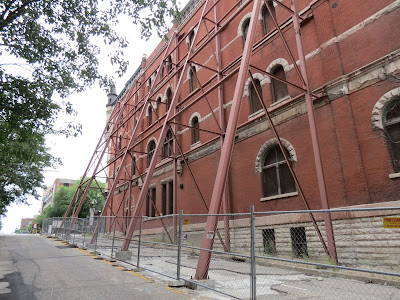 With any luck, this pictures will be archived by Google, and in 15 or 20 years people will view them, reflecting on how poor Main Street looked in some spots.  I believe the situation is temporary, but one never knows.

Posted by Daedelus Houndstooth at 10:47 PM