At about 9:00 on April 27, 1966, the earth near Charlestown Indiana erupted in a volcano like explosion.  In one instant, 175,000 pounds of gunpowder exploded, ending three lives and shattering windows three miles away.  This is the story of what happened that morning, and what is left today.

Located on the ground of the old Indiana Army Ammunition Plant (INAAP) in Charlestown Indiana, igloo 5185 Q was one of 180 such structures built in 1941 when the plant opened.  The units are constructed something like in-ground swimming pools, rectangular concrete boxes built into the earth.  They are covered with arched roofs, which are then covered in a layer of dirt.  The roofs are thin, and the doors face in "safe" directions, so that should one explode, all the energy is directed upwards and into a harmless direction.


Every igloo has a steel vault door that locks securely from the outside.  There is also a loading dock, so that trucks could pull up to them.

The igloos were constructed with safety in mind.  Grounding wires run from every metal surface to the building itself, so that there would be less risk of static sparks, along with the resulting explosions.  A system was also employed to ground trucks that pull up the loading docks.

What happened that morning is unclear, as no one who witnessed the events survived to tell about it.  Certain facts are known, however, and that is all that we can relate here.  Three men clocked in to work that morning and checked out a 1.5 ton truck.  Dale E. Lord (aged 30), Adair Hayes (52) and William C. Zimbro (27) were tasked that day with transporting some powder from Igloo 5185 Q to another part of the plant.

At a little after 9:00 a.m., something went tragically wrong.   It could have been static discharge, a stray lightning bolt, anything, and at least one family was simply told that it was an "act of god."  Regardless, there was a massive and earth shaking explosion.  175,000 pounds of M9 flake powder used for launching mortar shells went off all at once.  Nothing was left of the igloo, and according to somewhat insensitive newspaper reports of the time, the men were killed traumatically by the blast.  A roll call of the plant employees was used to determine who exactly was missing, and thus presumed to have been killed in the explosion.  Little remained but a crater, some truck parts and very little that could be identified otherwise amidst the piles of dirt and concrete.

Most people know little of gunpowder, assuming that it is all the same stuff, a fast burning black powder.  In reality, gunpowders vary in both power and burning speed, and the M9 flake involved in the blast was uniquely dangerous.  It was made to burn EXTREMELY fast, so that it could launch a heavy shell long distances from a very short tube.  M9 is also sensitive to being handled roughly, and those who worked with the stuff in the 1960s still have a healthy fear of the stuff.


The blast shattered windows miles away, all around the plant itself and across the river in Prospect, Kentucky.  Aside from the three men who were instantly killed, dozens were injured by the blast wave or resulting broken glass.  Once the human remains were recovered, the hole in the ground was simply allowed to grow over with grass.  The igloo was not rebuilt, and nothing marks the site today.  (Summer of 2013), though I have heard that at times things have been placed on the site in remembrance of the lost.

The plant was more or less closed once the Vietnam War ended.  Beginning in the 1990s, tracts of the land were sold off for redevelopment.  Today, some parts have been transferred to the Charlestown State Park, while others remain under lock and key.  The igloo field can only be accessed with special permission, which we were lucky to get.  One day these unique buildings will be torn down, and nothing will remain on the site.

The three men who were killed in the blast are today buried in surrounding cemeteries in Charlestown, Sellersburg, and Jeffersonville.  During the course of my research, I located all three graves, paying my respects at each.

What follows here are some newspaper clipping from the Louisville Courier Journal, covering the two days after the blast.  These were pulled from microfiche, and the photos didn't come out that clear as a result. 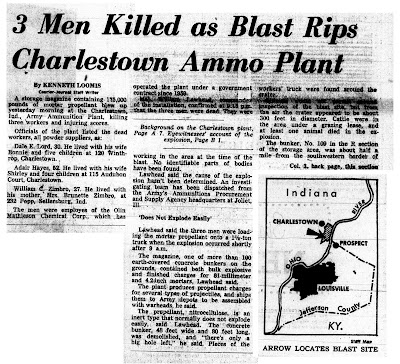 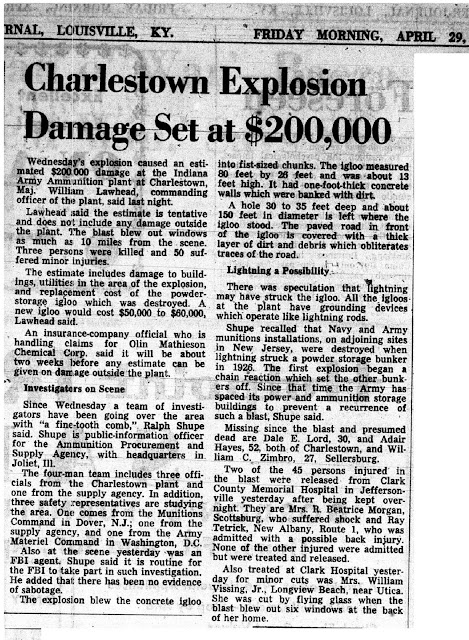 And here are three sets of reports from the Louisville Times.  One from the day of the blast, published that evening, and then two from the following days. 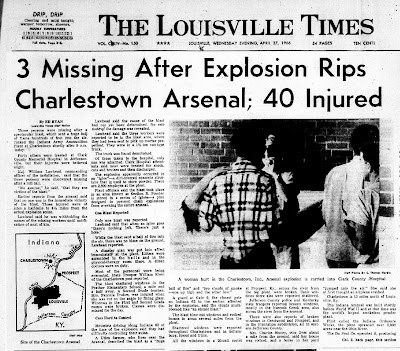 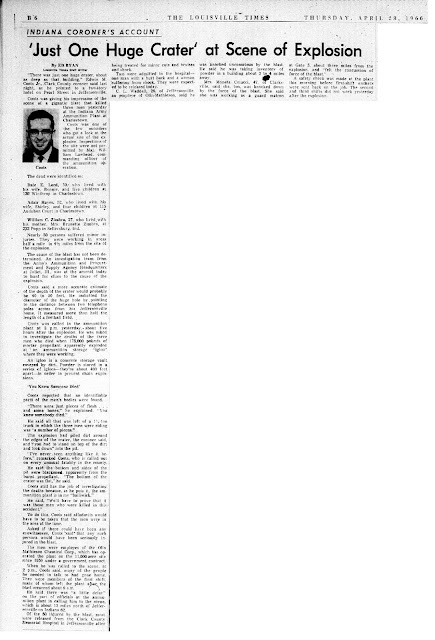 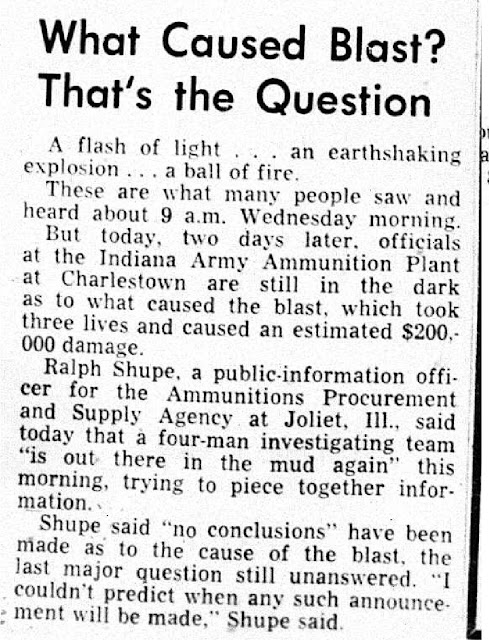 This post has gotten a lot of attention lately.  Rather than copy and paste every comment into the article, it seems better to leave them as posted below.  This will keep the context intact.  Besides, any effort I make to rewrite them will fail to convey the meaning they already have.  If anyone posts anything that seems especially sensitive (phone numbers, email addresses) I will probably trim them just to prevent people from getting on spam-mail or phone call lists.

Thank you all for comments and stories.
Posted by Daedelus Houndstooth at 8:58 PM