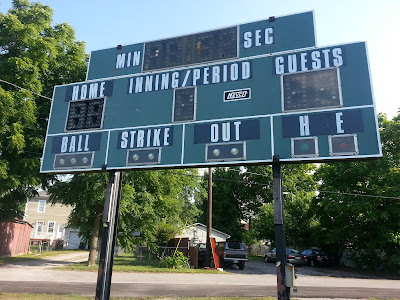 In the midst of construction work for a new pedestrian bridge in Jeffersonville Indiana, a Civil War Cemetery was rediscovered.  While its existence wasn't a mystery, its exact location was.  As it turns out, children had been playing baseball on top of a graveyard for the better part of a century.


The baseball field near the river in Jeffersonville, Indiana, has long been a local fixture.  Located on the eastern edge of Colston Park, it was until recently very well maintained.  Not until the conversion of the nearby Big Four Bridge into a pedestrian walkway was it's future in doubt.

While not apparent in the above photo, a ramp has been constructed from the dead end on the bridge, taking two blocks to reach the ground.  This ramp, and the accompanying welcome center were supposed to displace the ball field.  When local historians heard about this, they sprung into action.  They knew about something that had apparently been forgotten....

Long forgotten by most in the area was that fact that a Civil War Hospital had been nearby.  Given the casualty rates amongst participants in the war, it should be no surprise the any military hospital required a cemetery.  The location of this cemetery?  Well......

A (reasonable) fuss was made by some people, and excavations were ordered of the location.  As expected, graves were found.  This park, built in 1927, was built on a graveyard.

The original grave markers had been made of wood, by 1927, the had all rotted away.  Local authorities decided that a park was the only way to commemorate the dead.  This isn't unheard of, another graveyard on 9th Street in Louisville was similarly converted after the tornado of 1890.


It isn't clear what will be done with the land now.  It could of course be put back into usable shape, returning to its old use as a ball field.  It seems unlikely that a building will be placed on the site.  Only time will tell.

Click Here for Link to an article about the excavation work.