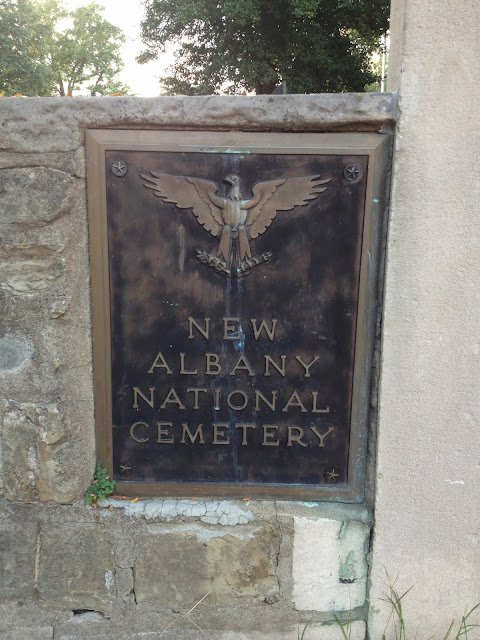 For any number of reasons, I've always felt a special connection to United States National Cemeteries.  Usually referred to as "Military Cemeteries," these green spaces are the final resting places of millions of American veterans and their spouses.  This is a brief photo tour of the one located in New Albany, Indiana.

The New Albany National Cemetery is interesting in that it is one of the originals, with development beginning in 1862.  While it now sits in the middle of a neighborhood, this certainly wasn't the case when it opened.  A lot of "new" cemeteries in my experience, then as now, are located about thirty minutes "away" from the center of town.  Thirty minutes by horse, foot, or car places them towards the edge of a community, while still making the trip reasonable.  The exception to this rule seems to be church cemeteries, which are sometimes fairly close to the town center.

Paul Frederick Johns went missing in 1968 over Laos when his A-1H Skyraider plane was shot down.  While the US is very dedicated to recovering the remains of the fallen, sometimes these efforts fail.  Over 83,000 servicemembers are still missing from the "modern" US wars, World War Two to the present.  JPAC, the Joint POW/MIA Accounting Command is tasked with carrying our searches for those still unaccounted for, and their efforts have brought closure for hundreds of families.


Another feature of these older cemeteries is the "mass" or "communal" grave.  Despite the best efforts of the Graves Registration Service in World War Two, it was often simply impossible to identify the remains of individual soldiers or airmen.  As a result, all of the recovered remains were placed in one grave that shared a common headstone.  I've seen such graves that contain twenty of more men.  In the days before DNA testing, there was little else that could be done. If you have further interest in the topic, I recommend "Soldier Dead" by Michael Sledge.

During the Civil War, there was a large emphasis on one's home state, something that is largely lost in today's society.  This is why headstones like this are marked with KY or IND, it was an important identifier of community.  Even today, soldiers at the Gettysburg National Cemetery are buried by state of origin, grouped in prearranged plots.

Units were largely composed of men from a single state or area, and a truly devastating battle could have the unintended effect of killing most of the young men of a city or county.  Perhaps the clearest example of this was the "University Grays," 135 men who enlisted from the University of Mississippi who enlisted together at the start of the war, nearly the entire school.  During Pickett's Charge at the Battle of Gettysburg, the unit suffered almost 100% casualties, destroying a generation men in the process.


Posted by Daedelus Houndstooth at 3:38 PM